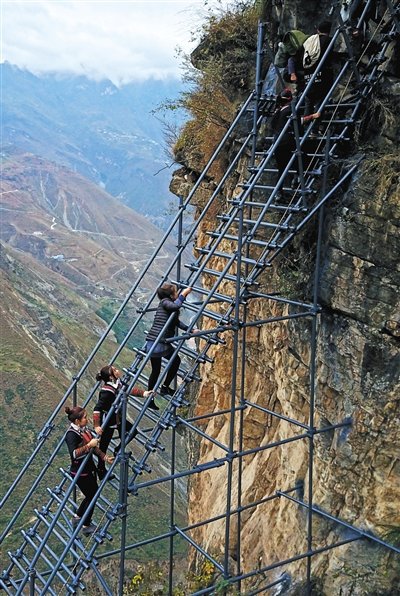 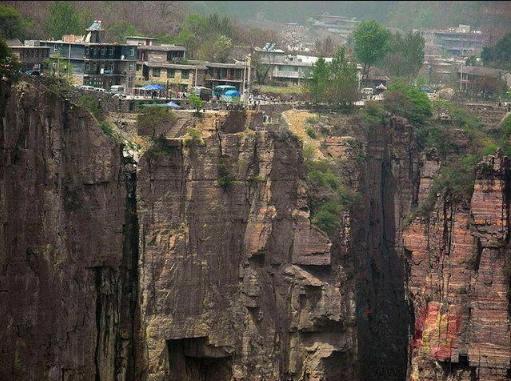 Hello everyone! Welcome back to MaoMi Chinese!

Do you dare to live in such a house which is on a mountain of more than 1,700 meters and there is a cliff outside your yard. If you want to go down the mountain, you have to climb the steep steel ladder little by little…and you have to be very, very careful because if you are not careful and step in the air, you are likely to fall from a mountain of more than 1,000 meters. What do you think? Are you already sweating just thinking about it? Although it sounds unbelievable, but this is the daily life of people in a Chinese village.

There is such a village in Sichuan Province in southwest China, in a mountainous area called Daliangshan. The village is on the mountain which is more than 1,700 meters high. This is also an ancient village, with a history of about seven hundred years. The village was once isolated, and the way down the mountain was only a steep steel ladder. It takes three or four hours to go down the mountain, and three to four hours to go up the mountain. Before 2015, this ladder was still made of wood, which was even more dangerous. If people accidentally stepped in the air, or if the wood was broken, they would fall. Therefore, people called this village "Cliff Village" because it is really a village built on a cliff.

In the past, people in the village were very poor. However, after the steel ladder was built, the village gradually became famous. There are also many young people in the village who use their mobile phones to do live broadcasts so that more people can see the Cliff Village. Later, more and more tourists came to the Cliff Village, and there were also small shops and a B&B in the village. What is even better is that in 2019, the local government built houses for the villagers down the mountain, and they could walk off the cliff and move into the houses in the village! However, there are also some villagers who are unwilling to move out, preferring to live in old houses on the cliffs. Why? They said they had lived there for five generations and were used to it. They liked the scenery on the mountain. Away from the mountain, there is no such scenery.

If it were you, would you like to live in such a village?